View an analysis of 222 famous programmers who are revered in the hacker culture as respected innovators, superstar coders, and the heroes of the computer revolution. Graphs break down the projects that propelled them to fame, the number of projects it took to make them famous, and the relative numbers of men and women who make up this elite group of famous hackers. 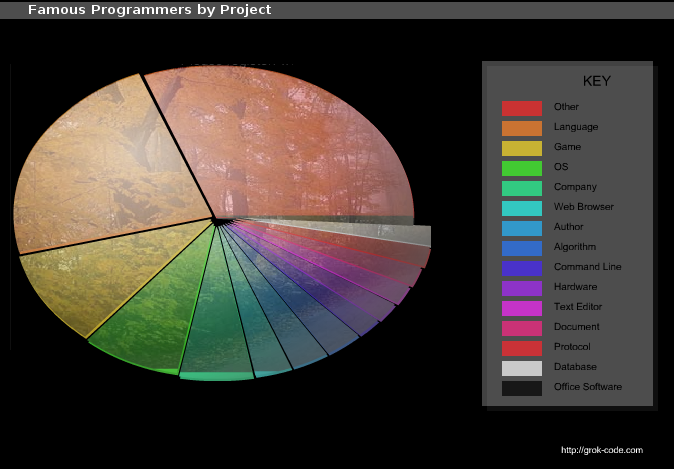 A note on the definition of famous

So what makes a programmer famous? Inclusion on Wikipedia’s page of famous programmers, with the added requirement that famous programmers have their own Wikipedia page. This gets rid of a few programmers who were added for obvious self-promotion – I’m looking at you Blazie Engineering guys, whoever you are. Unfortunately, it also takes a few great programmers out of the running, like Brian Harvey, creator of UCB Logo and Steve Chamberlain of cygwin fame.

By way of a disclaimer, I made one edit to the page while compiling the data. Carl Sassenrath was credited for operating systems and algorithms, and while Carl is a great guy (and was actually my boss for a short while) who has made some great contributions to those fields, I didn’t think it right to credit one person for two entire areas of computer science. So that leaves 222 programmers who fit the definition of famous, and 400 projects that they worked on.

Looking at the first graph, if you are looking to get famous, invent a language. Just over 23% of projects that famous programmers are known for are either inventing a language and/or writing a compiler. This group of famous programmers includes notables such as James Gosling (Java), Alan Kay (Smalltalk), and Guido van Rossum (Python’s Benevolent Dictator for Life).

Interestingly, 31.49% of projects couldn’t be put into a category that had more than 5 members. This is a huge long tail, and includes everything from coining the phrase “computer virus” (Leonard Adleman), to Beowulf clustering (Donald Becker), to being a coder on the IBM PC project team who wrote the Control-Alt-Delete keyboard handler (David Bradley). Another highlight from the ‘other’ category is Charles Simonyi, inventor of the dreaded Hungarian notation, and to throw in a bit of random trivia, also the fifth space tourist.

How many projects does it take to become a famous programmer?

Not many. 52.36% of famous programmers are known for their work on only one project. Obviously these guys have been involved in a variety of projects over the course of their careers, but for the majority, just one project propelled them to fame. On the flip side of the coin, there are a few people who achieved fame through their work on a number of smaller undertakings. For example, Lou Montulli is credited with creating the Lynx browser, cookies, the blink tag (ugh what were you thinking!), server push and client pull, HTTP proxying, HTTP over SSL, browser integration with animated GIFs, and being a founding member of the HTML working group at W3C. 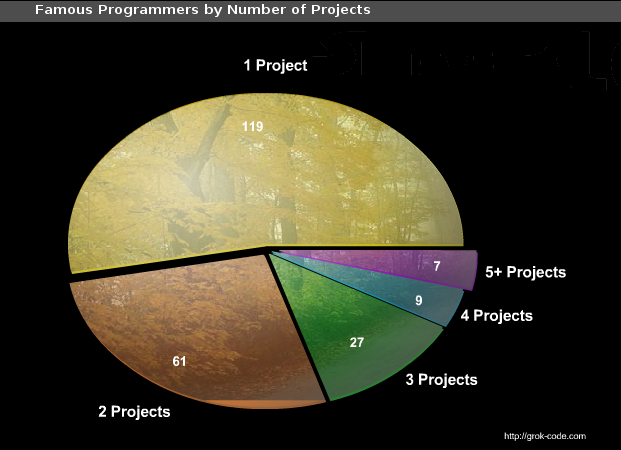 What happened to the women?

There are few women in the ranks of computer programmers, and pitifully few that can be called famous. So few in fact, that male-to-female transsexuals almost outnumber cis females. The dataset includes 211.5 men, and 10.5 women of whom 4 are transsexuals. More on that .5 of a person shortly.

Famous women programmers are Adele Goldberg, who worked at Xerox PARC laboratory and wrote a number of Smalltalk books, Grace Hopper, a pioneer in the field who wrote the first compiler, Ada Lovelace, credited as being the first programmer, Emily Short, who played a major role in the development of the interactive fiction development system Inform 7, Lynne Jolitz, notable for her work with 386BSD, and Pamela Crossely, creator of SIMPLE for academic management of web pages and related Unicode-capable applications for teaching and research.

Also of note is Roberta Williams, who was only able to credit the women’s side with half an entry since she shares her notoriety and Wikipedia entry with her husband Ken. This is the where the .5 comes from in the men’s and women’s datasets – together the husband and wife team counts as a full person. They are credited with founding Sierra On-Line and writing and designing several games, including the popular King’s Quest series. Their story is partially chronicled in Hackers: Heroes of the Computer Revolution.

The 4 male to female transsexuals in the list are Rebecca Heineman, author of Bard’s Tale III: Thief of Fate and Dragon Wars, Audrey Tang, known for the Pugs Perl 6 compiler, Sophie Wilson, designer of the instruction set for the Acorn RISC Machine, and Danielle Bunten Berry, known for the M.U.L.E. multiplayer video game written in 1983. 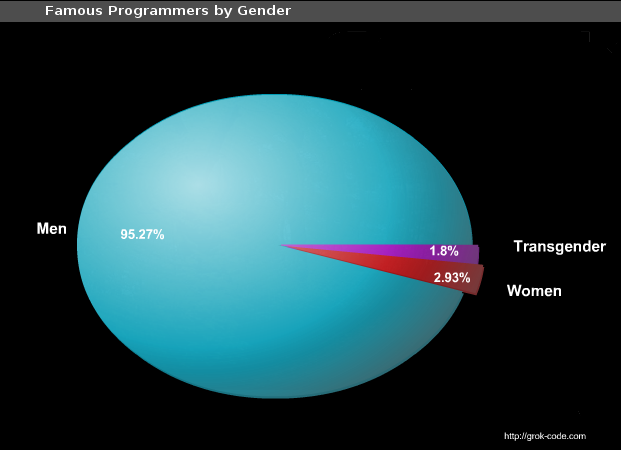 So there it is. The most famous and revered programmers in our culture work on a variety of projects, especially compilers. They are well-known for only a small number projects, and the overwhelmingly vast majority of them are male.

[Update: There have been quite a few changes to the Wikipedia page since this article was published and hit Slashdot. Here is the version the data came from. And a big thanks to everyone who left comments and provided corrections. The article and last graph have been fixed to reflect the corrected numbers. Also no more trees in the background.]